Requiem for a Harlequin

Requiem for a Harlequin is the second album released by David Allan Coe. It was released in 1973 on SSS International Records. There are no track names; side one was simply named, “The Beginning” and side two, “The End”.

This is a concept album in which Coe repeatedly uses the phrase “Asphalt Jungle” to describe the life he grew up in. Reoccurring themes include hard tales of life, love, relationships, The Civil Rights Movement, 60’s Counter Culture ideology, and modern society. The record is entirely spoken word (self described by Coe in recent years as “The first Rap album”) with backing musical style encompassing a wide variety of genres including Rock and Roll, Blues, Folk, and Gospel. 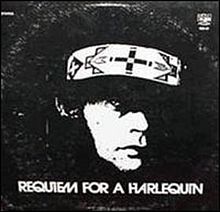