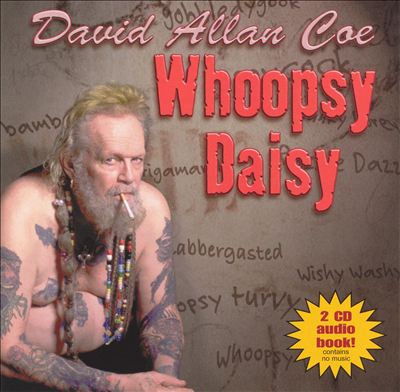 This is a double-CD audio book that David Allan Coe recorded in 1997. This picks up where his autobiography left off. And this is the no-holds-barred story of David’s life from the late ’70s up until that time. All the stories are here, the tales of abuses, fame, power, wife beating, being beaten, broken marriages, children reared and responsibility, struggles with the IRS, lawsuits, ripoffs inside and outside the music biz, betrayals, family alcoholism, bad craziness, poor business and relationship decisions, and most of all, acceptance of personal flaws, mistakes, and accomplishments. According to Coe, “Right is right and wrong is wrong, but you have to stand for something or you’ll fall for anything.” Coe comes off not as a complainer, not as a boaster, not as the outlaw braggart who was sometimes the Mysterious Rhinestone Cowboy and sometimes David Allan Coe in concert, but as a man who has done virtually everything and lived to tell about it, who is grateful for what he has, and is bemused by the things stolen from him, whether they be money, songs, women, reputation, etc.

But Coe never comes off as bitter, hateful, or even angry. He is as bewildered by some of the turns his life has taken as those who have followed his career are, and he goes to great pains to clear up some misconceptions — perhaps not only for listeners’ sake. There is great darkness on Whoopsy Daisy, sometimes unremittingly so, but the candor one has become accustomed to is also the hope and redemption, not of the man and his story, but for humanity itself. In an era when sleight of hand and image consciousness are paramount to living the life of an “artist,” Coe reveals that the life of a real artist is one of honesty, vision, and integrity — even if displaying that integrity is to reveal your shortcomings, flaws, and dumb mistakes. In this way, Whoopsy Daisy is also a recording of great hope and promise — it provides an example without intending to, which is an example of the best kind. If there is any complaint about Whoopsy Daisy, it is that it is not a three-CD set so that listeners can hear about the man from 1997 to the present. Listening to him talk of his life and history is a deeply moving and revelatory experience, one full of paradox, beauty, and tragedy, all the things that make us human. Hurry up and record the latest chapter, Mr. Coe; if there were ever a time when we needed to hear somebody tell the truth, it’s the present one.